NAMC-OR is recognizing five members and partners this year for their accomplishments, commitment to our community and their partnership with NAMC-OR itself. Congratulations to all!

While the past two years have been challenging for most people in different ways, Edward Stevens feels especially grateful for his support network. He and his business, Over Night Pressure Washing Services, not only survived the COVID-19 pandemic, but he also had cancer and a successful surgery to remove it.

“We lost some customers during the cancer situation because I couldn’t work, and we’re still rebounding from that. There are a lot of people who helped me get through, and we’re picking up contracts here and there,” he said.

In addition to NAMC-OR’s support, Stevens wanted to take this opportunity to thank his fiancée, Cindy Hampton, his “Little Big Sister,” Sam Miller, John Washington and Fawn Aberson, a board representative for the Soul District Business Association. Before starting Over Night Pressure Washing Services in 2020, Stevens worked for seven years as a rigger at Portland’s Swan Island Shipyard and held a few other jobs before going to work as a pressure washer. In addition to wanting to work for himself, his motivation to start his own company was to leave something special for his children.

Stevens said the most rewarding aspect of his profession is receiving compliments from people who appreciate his work. “I like to see the smiles on people’s faces when they get what they asked for and making them happy,” he said.

He noted that NAMC-OR has provided mentorship, helped him submit paperwork correctly and encouraged him to continue to grow his business. To receive a Breaking Barriers Award from the organization is particularly meaningful at this time. “I’m just thankful to be recognized by my peers and the people in the industry who are there when I need them. It’s a blessing,” Stevens said.

“We nominated Edward because we have been impressed by all that he has been striving for. He has had an incredible journey and it’s only part way through!” the NAMC-OR team said. “His resilience, strength, tenacity and vulnerability are just a few of the reasons that we admire him. He shows up and speaks up and he fights every single day, in spite of all of the obstacles, trials and tribulations that he has faced over the last year. We are so proud of his journey. He is inspiring.”


The Port of Portland initiated its formal diversity, equity and inclusion efforts in 2013 when it hired two consultants to provide guidance and advice. In 2018, the Port of Portland Commission approved its first-ever social equity policy with the goal of increasing small business participation; creating an equitable, inclusive and welcoming place to work; and engaging community.

The Port began formal implementation of its social equity plan in July 2019. During the 2019-2020 fiscal year, 27 percent of Port contracts valued over $500,000 were awarded directly to a small business. In total, 22 percent of its contract dollars were awarded to small businesses, a 29 percent increase from 2015.

Forty percent of the total number of contracts went to small businesses, marking a 104 percent increase in five years. Additionally, 40 subcontracts valued at $1.7 million went to certified small businesses. Through its Mentor Protégé Program, which connects small businesses with mentors over a three-year period, the Port

graduated 11 firms in 2020 and recruited 15 new small businesses for the next cohort. Its 2020 graduating class saw an increase in revenue of more than 157 percent and bonding capacity above 289 percent over their three years in the program, while also creating 58 new jobs.

Kimberly Sutton, MCA, the Port’s Equity in Contracting manager, noted that over the past few years, the small business community as a whole has been negatively affected by the economic impacts of COVID-19. Minority owned small businesses were disproportionately impacted by the pandemic because they tend to be smaller, have less access to capital, and are less nimble than their larger counterparts.

At the same time, construction was ramping up for the $2.2 billion Portland International Airport renovation project, T-Core. “It was clear that if we were strategic, we could use this project to support small minority contractors trying to survive the pandemic,” Sutton said, adding that in order to do that, the Port needed the right partners at the table to help it look at the project, schedule and scopes of work with fresh eyes.

“We also needed a partner who has their finger on the pulse of the minority contracting community to assist our team with getting small contractors matched up with appropriate scopes and preparing them to bid work. NAMC-OR was an obvious partner for us, as they have a history of providing owners representation services to other organizations in the region and those projects achieving high inclusion results,” she said.

“NAMC-OR has been wonderful to work with as they have opened our eyes to our own internal processes that were creating barriers, and have connected us to new businesses that are now learning how to work in a busy airport. This partnership is truly a win-win,” Sutton said.

While equity practitioners, by nature of their work, are in service to their community, little time is taken to reflect upon the true impact they have on those around them as they continue to fight the good fight, she pointed out.

“This award gives us a moment to step back and reflect on the good work the team does to support our community, and the award is especially appreciated because it recognizes the entire Equity in Contracting team and not just leadership,” Sutton said. “The Port’s EIC department has many hard-working individuals working in various roles, all of which are equally important in moving the needle. I love that everyone can take a moment to understand how their role is critical to the organization and how we support our

“NAMC has been really impressed with how the Port Procurement team has shown up over these past couple of years,” the NAMC-OR team said. “Their values around Shared Prosperity and how we see the team effectuate those values into action is the mark of a true partner. Being an open and receptive ear for member concerns, direct and immediate action to address issues, recognition and open engagement of NAMC to help on equity efforts, ensuring businesses owned by people of color receive excellent technical assistance and support services are just a few of the reasons that we are recognizing the Port team!”


After working in construction for eight years, completing a five-year apprenticeship in December 2021 to

become a journeyman electrician and launching her own business, 3v3ryday Grind, in 2021, Isis Harris had her mind on diversifying the construction industry while also introducing other women and BIPOC community members to job opportunities in the trades.

Harris initiated a series of three events, held last August, September and October, that brought people of color together with pre-apprenticeship programs, general contractors and city agencies for introductions and hands-on workshops.

The free events were family friendly and provided children a chance to build solar-powered models, play in bounce houses, have their faces painted and get balloon animals while the adults learned about career development opportunities.

“It was really an effort to help individuals understand what apprenticeship looks like in different trades,” she said. “I didn’t know what apprenticeship looked like when I was a youth, so this helps debunk some of the myths.” Harris hopes to provide the sessions again in 2023 and is currently seeking sponsorships for it. She also is running 3v3ryday Grind, which produces brightly colored gear designed for high visibility for on-the-job safety and embraces “blending out.”

It’s a very personal venture for Harris who, as a Black woman, stands out on jobsites. The 3s in her company’s name honor her three sons, and she said the brand “embodies not only how I grind, but who I grind for daily.” Revenue from 3v3ryday Grind is supporting her goal of starting her own electrical contracting business.

Harris said the Community Building Award from NAMCOR adds to that motivation. “I’m truly honored to receive this award and appreciate that they saw the merit in what I was trying to do for the community and the industry.”

“We at NAMC have been so incredibly proud of all of Isis’ work and persistence to see her vision for our community come to fruition through the Community Pulse Series,” the NAMC-OR team said. “In addition to running a dynamic business, the way in which Isis organized, funded and pulled off such a huge and well attended event was absolutely incredible. This recognition celebrates Isis’ ability to connect to our community in genuine and authentic ways, extraordinary efforts in meeting the needs of our community, and bringing folks together for the greater good in pursuit of economic justice.” 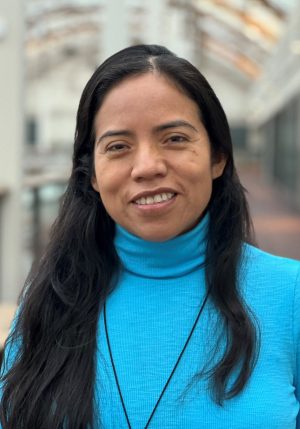 Born and raised in Guatemala, Linda Roblero has a deep appreciation for construction work and the projects she does. These include interior remodeling, interior and exterior painting, decking, pavers and tile work.

Roblero graduated from college in 2003 with a degree in civil engineering from Portland State University. She worked for a number of years as a transportation engineer, facility engineer and wetland restoration engineer. She started InterConstruction in late 2019 and employs four people on her team.

“My dream is helping poor, elderly people to have a nice shower and a nice kitchen. In the morning when you get up, you feel super nice drinking a cup of coffee in a nice kitchen,” she said.

“The Breaking Barriers Award means a lot to me,” she noted.

“We were honored to nominate Linda. We truly admire the work she does,” noted the NAMC-OR team. “She works so hard and is always seeking out ways to further educate herself and build her business knowledge. She puts herself out there in ways that are courageous, especially for women of color, and we admire her so much. Her drive, persistence, work ethic, kindness and compassion for the community are just a few of the

reasons that we are so proud of Linda and all that she does!”

Leon Araiza serves as a voice for people of color on topics such as racism and unconscious bias in the construction industry. He has shared publicly some of the names he has been called on jobsites and how, as a business owner, inspectors approached his white employees instead of him. Araiza is president and owner of Advanced Tribal, a Salem- based MBE/DBE multidisciplinary company, which provides design-build, construction management and general contracting services for the commercial, government and residential sectors.

A graduate of the Port of Portland’s Mentor Protégé Program, Araiza continues to expand his business acumen through NAMC University.

With a commitment to giving back, he also serves as a training agent for the Northwest College of Construction and works with apprentices, providing on-the-job training and mentoring.

“There are so many reasons that Leon exemplifies all that we believe here at NAMC Oregon: His mission and values-driven approach to Advanced Tribal as a platform to uplift the health and well being of the Native community, his humility and thoughtful considerations for all that he does and the impacts that it has on others, his rooted and grounded identity as a Native person and the way in which he shows up and models true authenticity and cultural pride,” noted the NAMC-OR team. “Leon shows up, supports us and others, and we wouldn’t be who we are without him.”